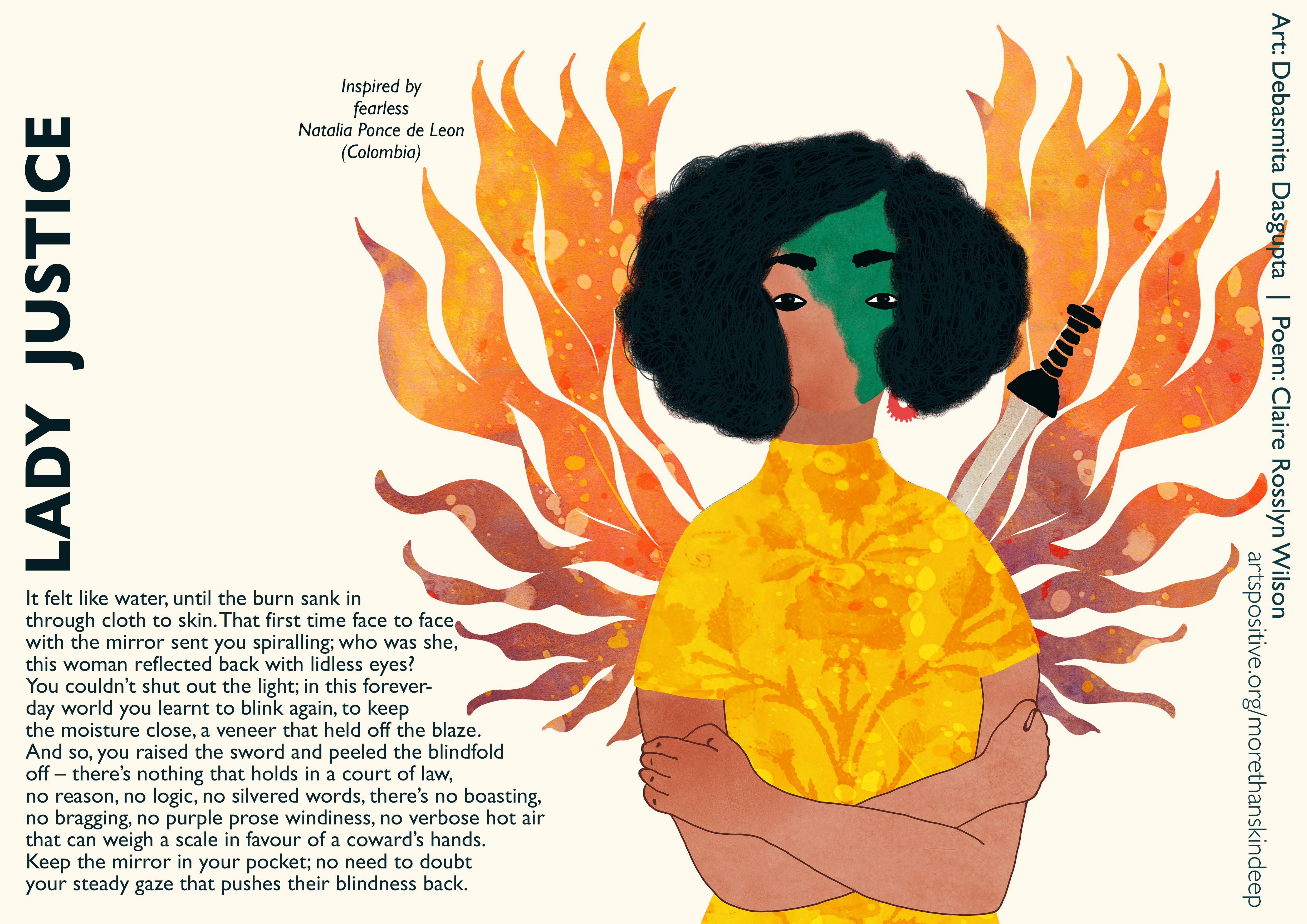 The series of FEARLESS FIFTEEN STORY is an outcome of "More than Skin Deep", a passion-project by artist, Debasmita Dasgupta (Singapore) and poet, Claire Rosslyn Wilson (Barcelona). This poster is inspired by the courage of Natalia Ponce de León from Colombia.
.......
Natalia's True Story >>

“I was reborn from the ashes and started a new life,” said Natalia Ponce de León during a speech about her fight for justice for acid attack victims at the ‘One Young World Conference’ in her hometown of Bogota. Natalia, who has been responsible for waking up an entire nation to the reality of the gender-based violence of acid attacks, founded Fundación Natalia Ponce de León, which bears the logo of a phoenix. Her foundation raises funds and works with hospital burn units, police, and prosecutors on how to treat cases and provide victims with swift care.

Very early on in her recovery process, Natalia had realised that it was fundamental for her to be strong in order to survive the physical and mental damage the acid attack had caused her. One-third of her body was severely burnt and she confessed to wanting to end her life, up until she met other burn victims in the hospital and was inspired by their strength.

Natalia became a high-profile campaigner against the leniency of the law for acid attacks in Colombia. She became a household name and soon, President Juan Manuel Santos offered an unprecedented reward of $37,000 for information that led to the arrest of the man who had attacked her, who was traced and detained within just eight days of the attack. Her activism helped push the Colombian government to enact a new law, which is named after her. The law defines acid attacks as a specific crime and increased the maximum sentence to 50 years in jail for the perpetrators and also provides victims with better state medical care.

Natalia used to wear a medical mask as part of her treatment and while stepping out in public. But she stopped doing that after the law was passed; she told herself she looked pretty and that it was time to show her face to the world. Through her foundation and along with other activists, she launched #TheLastMask campaign. The campaign kicked off with a direct message from Natalia herself, in the middle of a national press conference where Natalia surprised all by taking off her mask for the first time in public. She handed her mask to the press and the nation, asking them to wear it so it would be the last mask any Colombian woman would have to wear again, and she created one of the biggest social movements in Colombia.

Since the attack, Natalia has been nothing short of courageous and is optimistic about the future. She calls herself ‘a happy woman’ and wants to now start working with the families of the survivors and to teach the outside world how to deal with them without stigmatisation and discrimination.