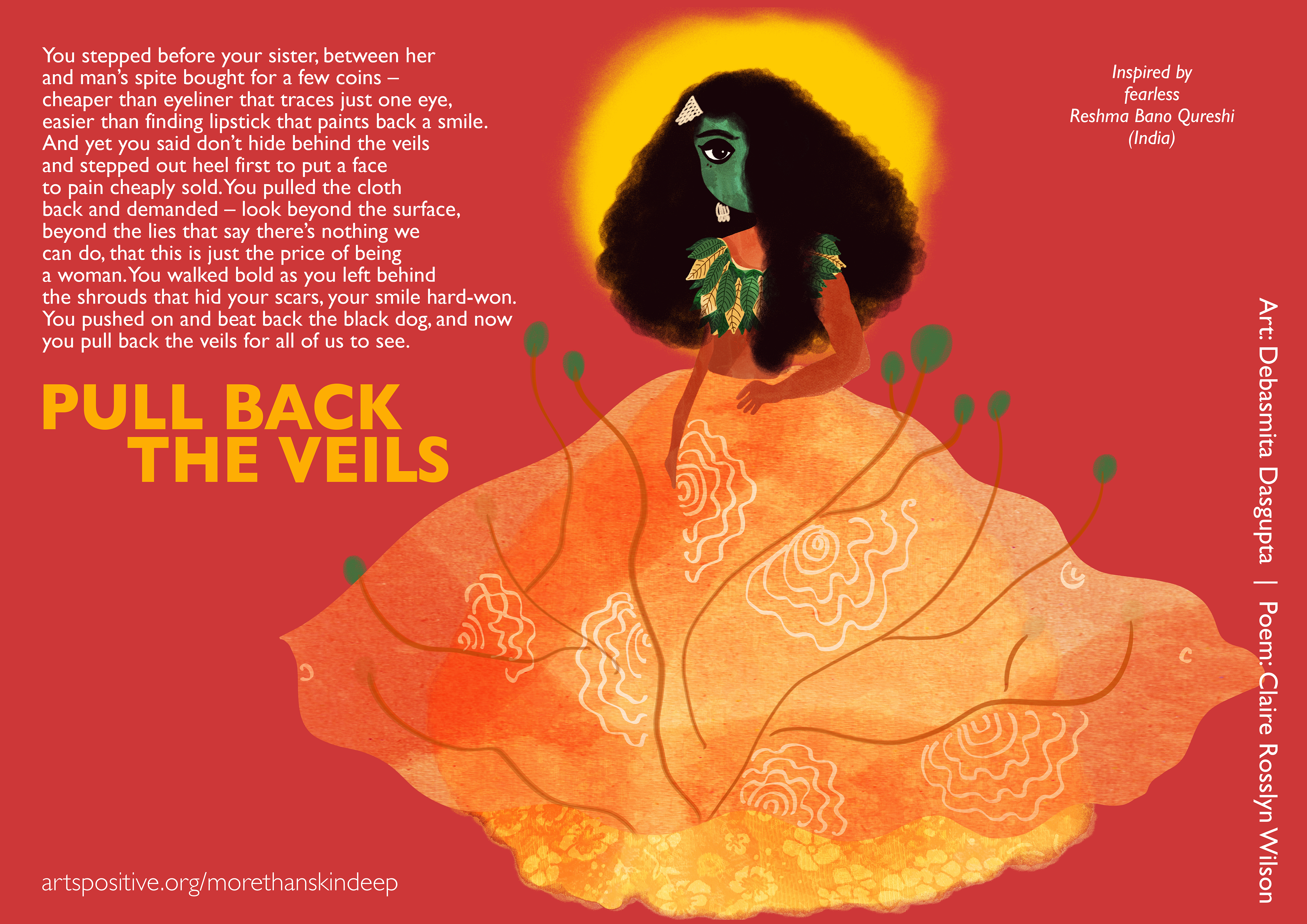 The series of FEARLESS FIFTEEN STORY is an outcome of "More than Skin Deep", a passion-project by artist, Debasmita Dasgupta (Singapore) and poet, Claire Rosslyn Wilson (Barcelona). This poster is inspired by the courage of Reshma Bano Qureshi from India.
.......
Reshma's True Story >>

“It’s not necessary that beauty is in a face, those who have a beautiful mind are truly beautiful,” said Reshma at the end of her ‘Brave Beauty’ video she did in collaboration with Blush. She was made over to look like her favourite Bollywood actress for the video and was quite pleased with the final outcome. Reshma who has an innate love for all things Bollywood, dressing up and makeup, has secured a place for herself in the fashion and beauty industry. She has done endless ad campaigns for designers and cosmetic companies while also raising awareness about acid violence.

One of her greatest achievements was when she made her modelling debut and walked the ramp for designer, Archana Kochhar at the New York fashion week in the year 2016. Since then, Reshma has been unstoppable and has appeared in numerous ad campaigns, one of which even won a Glass Lion and two Grand Prix at the Cannes Lions International Festival of Creativity, 2016 in France. Reshma’s unconventional journey into the glamour world has been a hard-won achievement for her.

Due to the acid attack that took place at her hometown while she was appearing for examinations, she suffered severe burns and disfigurations. And in the months that followed she fell into depression and even contemplated suicide. However, things started to shape for the better after she met Ria Sharma, the founder of Make Love Not Scars, an NGO that pioneered the #EndAcidSale movement in India. With the help of Ria and a strong support system, Reshma was able to turn her fate around. Soon she had also stopped covering her face
in public.

In association with the foundation, Make Love Not Scars, Reshma appeared in a series of video campaigns where she turned seeming beauty advice into a denunciation of the ease with which men can obtain acid in Indian markets. As for her future, she now wants to pursue her studies and later work at a non-profit, empowering young girls like herself.

Reshma’s only message to the world is, to live and make the most of life while also lending a helping hand to those in need.