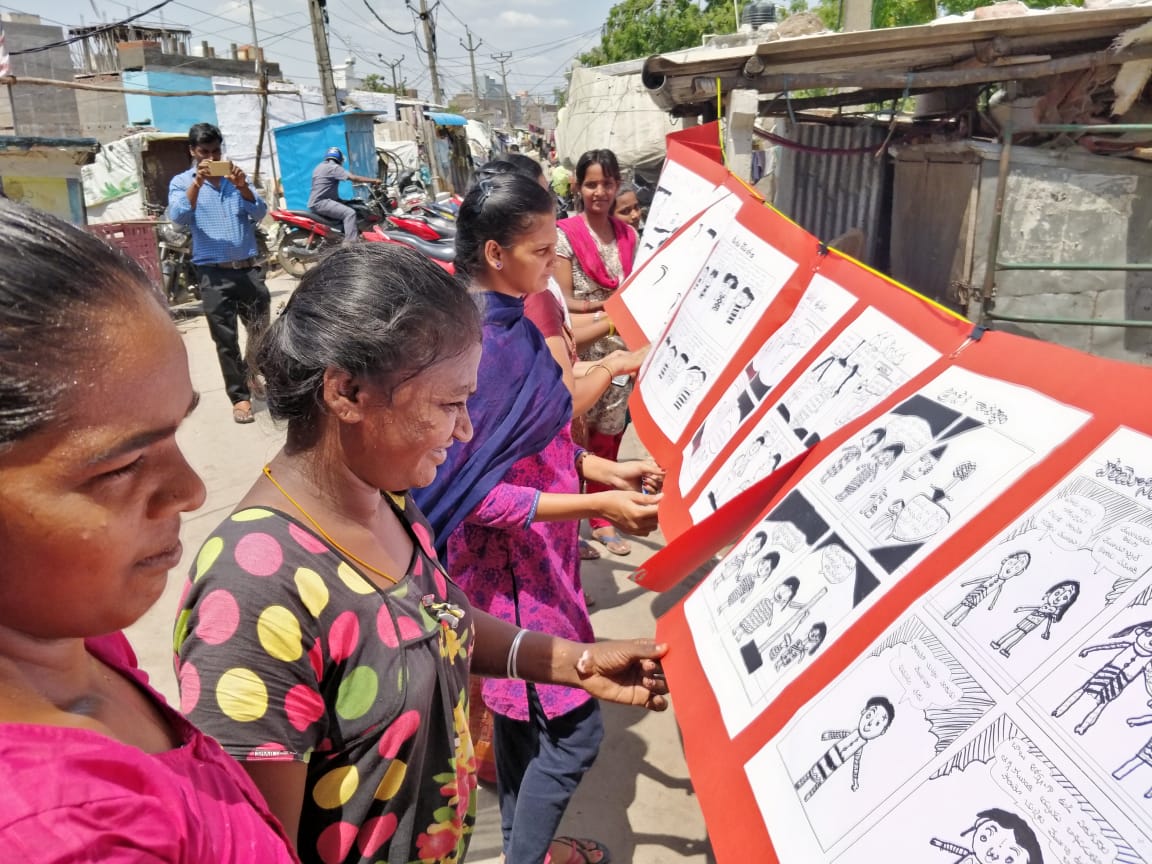 Comic book artist Jim Lee has rightly said, “One of the key characteristics of the comic book medium is that it is not brought to life by just one voice.” Another crucial characteristic is how deeply comics resonate with us because they speak directly to our brains’ pictorial bias.

Sharad Sharma, an Indian cartoonist, realised the importance of these characteristics and utilised this potential of comics to give voice to the under-represented and silent majority of indigenous people. He is the founder of World Comics Network and conceptualised the idea of Grassroots Comics, through which he took the art of cartooning and comics to the rural hinterland of India and other parts of the globe, as an alternative mode of communication for the common people. He has conducted extensive workshops with various organisations across the globe and has been part of the people’s movements in remote and conflict areas and initiated issue-focused campaigns using the medium of grassroots comics on various crisis including infanticide, feticide, child rights, corporal punishment, local governance, paedophilia, stereotypes, and antibiotic resistance.

We at ArtsPositive, admire and celebrate art-for-change advocates like Sharad and recently spoke to him about his journey into the artistic and innovative world of comic-led campaigns.


What inspired you to become a comic creator and to use it as a medium to raise awareness?

During the mid-90s, in the early years of my career, I used to work for a TV news channel. Working in a corporate media house, I realised that the majority of human interest stories tended to die early deaths and that many regions of the country, such as the North-East, failed to hit the headlines unless something as big as a terrorist attack took place. I worried that a huge swathe of people were not represented in the mainstream media and had no outlets to have their voices heard. So, I resigned from my full-time TV job in 2003 and started devoting myself to the Grassroots comics initiative, which I began through using visuals storytelling methods in response to perceived gaps in the country’s media. At the time, I was also engaged with a social organization working in Rajasthan, which was struggling to have its material understood by neo-literate locals, due to their text-heavy content. As a solution, I converted the pieces into short stories supported by illustrations with local look-alike characters, which proved to be an effective way of engaging the locals. I was inspired by this experience and realised that a user-generated medium was required to address the issues of the silent majority and that comics could be utilised as a communication tool for the common man. I then began teaching the locals to develop their own community media in the form of grassroots comics.

Could you describe what Grassroots comics are?

Simply put, Grassroots comics are comics that tell a local story. They are a communication tool for all citizens that can transcend the barriers of language, literacy, media access and social classes and even castes. Due to these reasons, grassroots comics have been extremely successful in remote and conflict areas of India. And through our campaigns, we have also been able to spread this medium, worldwide.

Could you tell us how World Comics Network came into being and the journey so far.

World Comics Network was established through the Grassroots comics initiative. I saw that people liked the participatory approach of the methodology, non-threatening nature of the medium and generous encouragement from the trainers. Most importantly, they liked the fact that no one from the city told them what to and how to do it. If an issue was raised, the community applied their collective wisdom to find a solution and created comics out of them, which were then shared with others in the locality, which successfully opened up a debate on locally relevant issues. To me, this was story-telling at its best. Many years on, through World Comics Network, the global network of grassroots comics practitioners has been effective in reaching remote, low literacy areas, as well as the most developed societies across the globe. We have conducted more than 1200 comics workshops internationally and helped over 100,000 common people to express themselves using the simple grassroots comics methodology. Over 10,000 trainers have been trained in South Asia and through our organisation, spread the method to countries like Pakistan, Nepal, and Sri Lanka. There is also a notable presence in SE Asia and Europe. The concept was also introduced in West Africa, Latin America and the US.

What challenges have you faced in building the World Comics Network and how do you overcome them?

The art of cartooning and comics-making is not something considered for the masses. It took me several years and over 100 workshops to simplify the methodology and make it suitable for the masses. Initially, there were not many takers and when I started talking about using comics as an instrument for self-expression and communication, no one took me seriously, but my challenge was to establish the medium of as a serious tool. But soon, after a few attempts, people realised how cleverly they can communicate certain messages through this medium, which were otherwise impossible to even discuss behind closed doors. Comics being a non-threatening and lighter medium and most importantly, at the disposal of the communities, it became acceptable for all. And once we had tested the medium extensively in India, it became rather easy for us to export it to other parts of the globe including both developing and developed countries.

Why is it important to you that the voices of the under-represented / minority / common man be heard?

Being a part of mainstream media for over a decade, I had seen it from the inside and the switch from print to electronic media during the nineties had a serious impact on me. I realized that TV news channels had started creating news instead of covering them. Especially when, an editor discouraged my attempts to cover issue-focused stories by telling me that our middle-class audiences did not want to see the harsh realities of our country, rather were interested in feel-good stories and tabloids. However, my extensive travel throughout the country showed me a completely different picture than what was shown on TV. Stories of open-cast uranium mining in Jharkhand, the life of tribal and women health workers in Chhattisgarh, underdevelopment of northeastern region and discriminatory behaviour towards nomadic tribes of Rajasthan and Dalits of Orissa, and state-sponsored terrorism in Kashmir were some of the issues that caught my attention. Unfortunately it was soon clear to me that out of media’s sight also meant out of policy maker’s sight and I was determined to bring back the attention to the issues of these silent minorities, so I left the comfort of my studio-based job and went out in the field to work with real people and on real issues. The challenge, however, is only getting bigger, with the majority of media being owned by big corporate houses and editorial freedom being curbed by all means. The monologue of the mainstream press can only be countered by creating multiple narratives and that is possible through alternative mediums like grassroots comics.

Could you tell us a little about your campaigns?

Through WCI we developed a new methodology called “Grassroots Comics Campaigns” where campaigns on any local issues are built by creating content in the form of individual comics around a sub-theme. People’ participation increases manifold when they own the medium and feel part of the process. Some of our previous campaigns have been around issues such as; stereotypes against North-Eastern Indians, children’s participation in local governance, corporal punishment in schools, girl child rights, communalism etc. We’ve also launched another campaign called ‘Comics in Education’ that uses grassroots comics as a learning tool to improve the quality of education in schools.

What have the comics created by locals/students taught you?

When common people create comics in my workshop it is more than just a piece of art for them, a sense of pride and achievement is clearly visible on their faces. When a farmer, vegetable vendor or a homeless man sees his life story emerge into a visual art piece, it is nearly unbelievable to him. Most of the time, my struggle is to make them believe that their life stories are important and worth listening to and that people would pay attention to them. The larger than life image portrayed on TV and cinema has created a sense of disbelief amongst the common people about their own life stories. I had to learn how to support people, gain trust and respect their stories, and to never underestimate a community’s wisdom.
---
Photo credit: World Comics Network